What's all this then?

My name is Victoria Stiles and I'm an Early Career Historian currently doing whatever odd research / consulting / outreach / tutoring jobs come my way. I blog here about some of the interesting texts I've found.
My research focusses on books about Britain and the British Empire which were in circulation in Nazi Germany but you'll also find a smattering of school textbooks, witchcraft beliefs, bog drainage, bemused travellers and weird illustrations that caught my eye.
Translations from German are my own. Comments are currently unmoderated and are mostly spam for leather jackets anyway.

25th May
On Sunday week, after a long and severe confinement, Mr. William Washington, of the Golden Lion, Deansgate, aged 54 years.
On the 10th inst. Elizabeth, the daughter of Mr. Washington, of the Old Golden Lion, Deansgate, aged 25 years.
4. Also on 25th May, this account of the funeral of a teenager who died very far from home. I'd love to know more about these students, how willingly they came to Manchester, what they thought of their education in Christianity and a "useful branch of trade" and what happened to them all.
On the 19th ins. At Leaf-square academy, aged fifteen years, Drinave, one of the five Madagascar youths brought over to England a few years back for the purpose of being taught the principles of the Christian religion, as well as some useful branch of trade, with the intention of returning to their native country to communicate their acquired knowledge. On Sunday last his remains were conveyed from the academy to the chapel, at New Windsor, preceded by Dr. Clunie and the Rev. J. Preddie, the pall supported by the four remaining Madagascar youths, and followed by the whole of the students of the academy, with black crape and white favours on their arms. Mr. Preddie delivered an address to the students on the occasion, which evidently had an impressive effect; and Dr. Clunie, in the evening, preached the funeral sermon - The scene was altogether solemn and impressive.
5. If there's one thing I know about the early 1800s, it's that people should never travel anywhere for the benefit of their health.
6th July
On the 8th July, 1823, aged 41, on board the convict ship, Competition, in lat. 39. 54. South, long. 59. 37. East, on his passage, as surgeon on board, to New South Wales, Mr. G. Clayton, late House Apothecary at our Infirmary, which situation it was advisable for him to relinquish from his declining state of health, to resume his valuable services upon the element which was deemed more congenial to the peculiar state of his constitution. - He was highly respected by an extensive circle of friends, by whom and his relatives his early dissolution will be much lamented.
6. Finally, this elderly gentleman deserves to be singled out from those above on the grounds of GOTH GOALS.
7th September
At Bawdrip, near Bridgewater, aged 90, William Crossman. He had kept his coffin by him for 50 years, and used it as a cupboard. 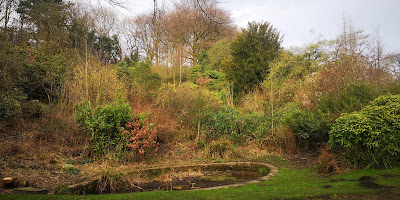 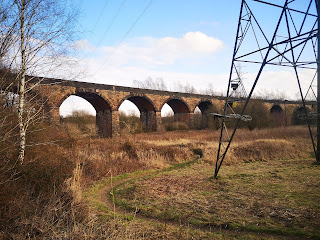 This blog had to die for a while as I got stuck into the final write-up stage of the PhD and now that I've finished and the thesis has been examined and approved (woohoo!) I'm not sure what to do with it. I want to do... something different. It started as a way of motivating myself to make sense of odd sources I found at fleamarkets and so on, but I want to do more than contribute to the growing mountain of "content" and clickbait which does little more than say "look at this weird thing - isn't the past just soooo quirky".

I want to talk more about how sources can be manipulated and how we understand and work around the inevitable gaps in our evidence. I'd also like to talk about how we're increasingly coming to terms with gaps which were previously largely unacknowledged - the fact that there is such a lack of diversity in the most dominant voices, or the biases and assumptions that shape all accounts, primary and secondary.

I'm not sure yet how to achieve this in the short, nugget format of blog posts. I'm also frankly terrified of writing something that might come back to haunt me later on. While I'm fairly sure I've got the backbone to admit that I was wrong about something when presented with new information, I still want to make sure that everything I write has been thought through as best I can. Plus, now that I'm "done", I've got job-hunting, preparing things for publication, further job-hunting, additional research, figuring out which conferences I can afford to go to and yes more job-hunting to fill my time.

In short, goodness knows what will actually get done here but I'm going to have a proper crack at making it count.
5 comments:


Today is the 255th anniversary of the opening of the British Museum to the public. The first few decades of tours were not without their problems, and there's a great account available on their website of the mounting discontent at delays in getting tickets and at the lack of information available to the visitors being hurried through the collections.

Twenty-three years after it opened, German writer Karl Philipp Moritz gave this account of his visit:

I have had the happiness to become acquainted with the Rev. Mr. Woide; who, though well known all over Europe to be one of the most learned men of the age, is yet, if possible, less estimable for his learning than he is for his unaffected goodness of heart.  He holds a respectable office in the museum, and was obliging enough to procure me permission to see it, luckily the day before it was shut up.  In general you must give in your name a fortnight before you can he admitted.  But after all, I am sorry to say, it was the rooms, the glass cases, the shelves, or the repository for the books in the British Museum which I saw, and not the museum itself, we were hurried on so rapidly through the apartments.  The company, who saw it when and as I did, was various, and some of all sorts; some, I believe, of the very lowest classes of the people, of both sexes; for, as it is the property of the nation, every one has the same right (I use the term of the country) to see it that another has.  I had Mr. Wendeborn’s book in my pocket, and it, at least, enabled me to take a somewhat more particular notice of some of the principal things; such as the Egyptian mummy, a head of Homer, &c.  The rest of the company, observing that I had some assistance which they had not, soon gathered round me; I pointed out to them as we went along, from Mr. Wendeborn’s German book, what there was most worth seeing here.  The gentleman who conducted us took little pains to conceal the contempt which he felt for my communications when he found out that it was only a German description of the British Museum I had got.  The rapidly passing through this vast suite of rooms, in a space of time little, if at all, exceeding an hour, with leisure just to cast one poor longing look of astonishment on all these stupendous treasures of natural curiosities, antiquities, and literature, in the contemplation of which you could with pleasure spend years, and a whole life might be employed in the study of them - quite confuses, stuns, and overpowers one.  In some branches this collection is said to be far surpassed by some others; but taken altogether, and for size, it certainly is equalled by none.  The few foreign divines who travel through England generally desire to have the Alexandrian manuscript shewn them, in order to be convinced with their own eyes whether the passage, “These are the three that bear record, &c.,” is to be found there or not.

And here's a picture of by far my favourite exhibit in the museum, Hans Schlottheim's mechanical galleon. 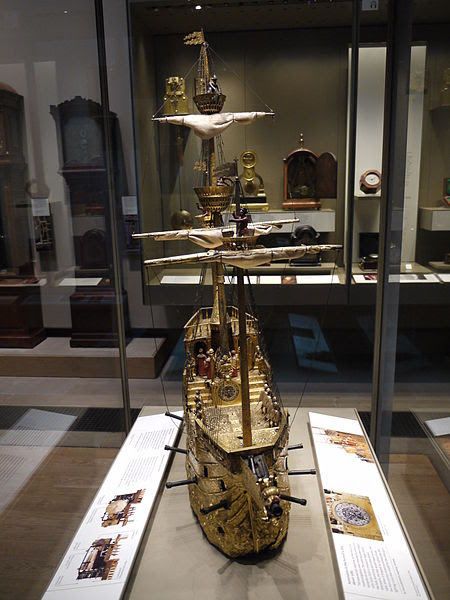